Onstage, the men dressed in white are putting on a show for thousands of screaming fans. Backstage, the men in black are at work, moving invisibly, making sure the gig runs perfectly.

The Dirty Daddies are the Netherlands most popular cover band, selling out venues across the country, from Amsterdam to Maastricht, with their spectacular rock concerts. Quietly ensuring the spectacle runs smoothly is Bob van Lieshout (pictured bottom center), The Dirty Daddies’ guitar technician.

“What I do is I make sure that all the guitars are set up to their best, so they sound to their best,” Bob said. “We’ve got 15 stringed instruments, which are all my responsibility.”

Before each gig it’s Bob’s job to check all the instruments are in good working order and tuned to perfection. He also checks the amps and does a sound check with the audio team.

“During the show, I’ll make sure that the guitar players get the guitar they need for the song just a couple of seconds before the song starts,” he said. “We’ve got a lot of guitar switches, a lot of moments where sometimes, for example, the singer plays a song acoustically and he needs to get the acoustic guitar very quickly.”

A lifelong passion for music becomes a career

As a lifelong “muso”, Bob is living the rock’n’roll dream.

“I’ve always been passionate about music,” he said. “I used to play saxophone when I was a kid and then I started playing around with DJ gear. When I was about 16, I met a guy who asked me if I was open to learning the guitar, he just gave me the first chords and the first song to play.”

Bob’s love of guitar started much earlier in life, however.

“I remember sitting on my Dad’s lap watching Rocky, the movie, and I heard the ‘Eye of the Tiger’ song and I was like, ‘okay, I don’t know what that sound is, but I love it’,” he said. “It was years later that I discovered that it was a guitar, so I think the sound of a guitar, the love for the guitar started really early, but I didn’t know what it was.”

Bob went on to study music, and specifically guitar, at the Dutch School of Popular Music, one of the top music colleges in the Netherlands. After he graduated, The Dirty Daddies called Bob in to help for one concert, because they needed his skills. It quickly became a regular thing and over the past five years he’s worked on hundreds of shows and at dozens of music festivals with them across not just the Netherlands but other European countries where the band is popular, including Belgium and Germany.

While it’s Bob’s job to support the band, he’s not without his own form of support. Bob wears Steel Blue boots. 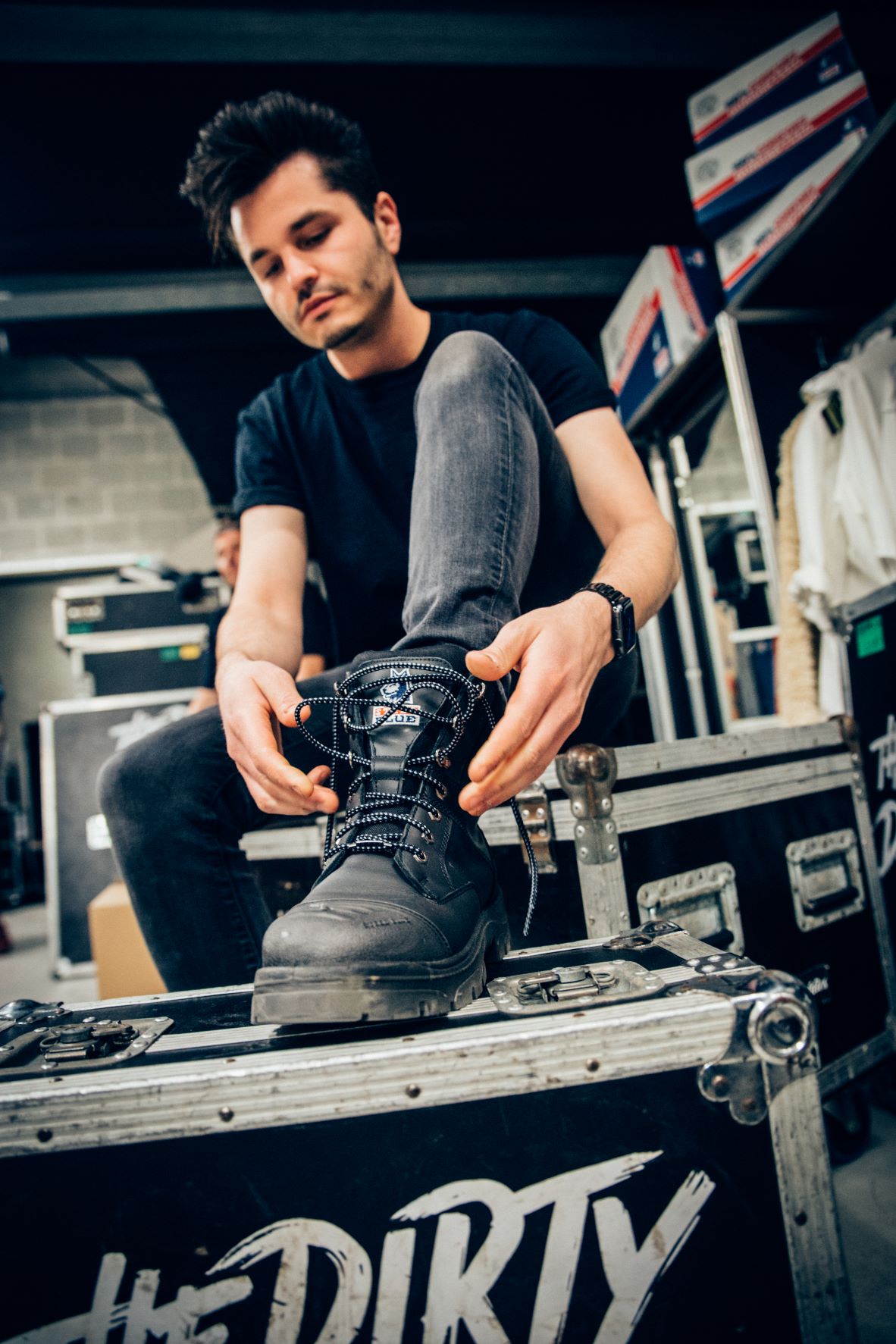 “We all wear them, all the backstage team,” he said. “We’re always working in different environments — so sometimes it’s a rainy, muddy day on a festival and sometimes it’s on a really big stage and perfect conditions. But, for our safety, and for any weather conditions, I think they’re the best boots you can have.

“I like that they’re high and, besides the safety aspect, they feel great on your feet. I can walk all day on them and don’t have any worries about having sore feet. At a normal festival we might start at 5pm and work until 1 or 2 am. Those are long days and it’s mostly standing, so I need to have boots that help me through the day and not hurt my feet or hurt my back.

“We also work with very large flight cases, which are really heavy, and sometimes a case can fall off the stage or out of a truck or whatever, and you don’t want one of them landing on your feet! So the boots keep us safe in those situations, too.”

Head to your local Steel Blue distributor to discover work boots that are a mark of true skill, or shop online.