While training in 2017 to represent Australia in dressage at the World Equestrian Games, Hacia Atherton was thrown from her horse. The 600 kg animal fell on top of her, crushing her pelvis, fracturing her hips and severely damaging the nerves in her right leg.

When she woke up in hospital, surgeons told her she’d never again walk without at least the use of a walking frame.

That shocking news marked the start of a life-changing journey. Hacia was not going to let tragedy dictate her life. She set herself the goal of learning to walk again, unaided. Five years and 24 operations later, Hacia was not only walking, she was taking part in 100 km bike rides, sprint distance triathlons and half marathons.

Hacia’s story of recovery is inspiring, but it doesn’t end there.

“When you spend six months in hospital doing physio, you have a lot of time on your hands,” Hacia said. “I did a lot of thinking.”

Creating opportunities for women in trades

What was on Hacia’s mind during those long months of treatment might come as a surprise.

“I’d gone back to uni as a mature-age student to do a commerce degree majoring in accounting. After I completed that my dad said, ‘Now get in the factory and learn the trade side of the business’. So, I started working in the family business, manufacturing medical infection control equipment. I worked in a range of different roles, from customer relations to finance.”

But it was when Hacia was given the chance to try welding that something sparked inside her. After years of bouncing around studying various subjects, looking for something she loved enough to turn it into a career, Hacia had finally found it.

“I was like, ‘Wow, imagine if I’d had this experience when I was 15 or 16, or even 18 or 19, and a lot earlier in my career, how different my life would be’,” she said. “And I thought, ‘Here I am having a crack at learning how to weld and I’m so lucky that I can have this opportunity’, but the majority of Australian women definitely do not have that opportunity or access.

“And even though I did have all of that opportunity and access, it wasn’t a career path that was offered to me, because I was a woman.” 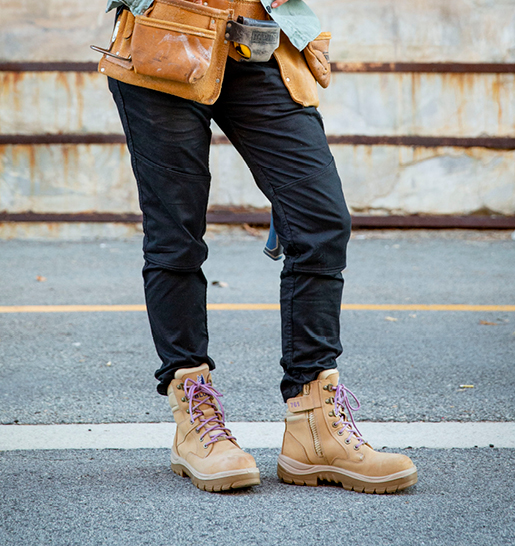 Inspiring women to learn a trade and secure their career

Hacia comes from a long line of plumbers. Five generations of them, in fact. Her great-great-grandfather was a founding contractor of the Master Plumbers’ Association. But despite that rich family history, she said a life in trades was “never really put in front of me as a career path”.

While lying in hospital, passing time, it was this thought that played on Hacia’s mind. She started speaking to women working in trades.

“I think I just really emotionally connected what I was going through — losing my ability to walk and having to really fight hard to get back that ability — with how hard these women had to fight to get into trades, and to succeed in trades and to even keep their jobs in trades.”

When she came out of hospital, Hacia founded Empowered Women in Trades, a charity that helps educational institutions and workplaces encourage women to see trades as a viable career path.

“We want to inspire more women to learn a trade and secure a pathway into a rewarding industry career,” she said.

The charity runs a range of programs, including some designed to help women stay in their careers once they’re working in their industry of choice — industries that are often not very welcoming for women.

“Female representation in trades across Australia is only 3% and in some trades, like plumbing, it’s under 1%,” Hacia said. “As I say to these women that are going into the program, with only 100 female plumbers in Victoria, even 10 women going into the industry is going to make such a big, meaningful difference.

“If everyone in industry can focus on supporting one or two women into the industry, we’re going to create change really quickly.”

According to the Institute for Women’s Policy Research, over the past five years the number of women in trades globally increased by almost a third, yet tradeswomen are only 3.9% of those who work “on the tools” in the construction industry worldwide.

"Female representation in trades across Australia is only 3% and in some trades, like plumbing, it’s under 1%"

Why do you wear Steel Blue work boots?

“I started researching the best kind of work boots for someone in my situation and I decided Steel Blue was the best one,” she said. “Then I went into the shops and I saw the pink boots, and pink is my favourite colour. I was like, ‘This couldn’t get any better — boots that are going to be supportive of my medical condition, and they’re pink? Perfect!”

Hacia has since teamed up with Steel Blue to provide boots to some of the women going through her Empowered Women in Trades program.

Check out Steel Blue’s pink boots, which raise money for Breast Cancer Care WA. Head to your local Steel Blue stockist to discover work boots that are a mark of true skill, or shop online.